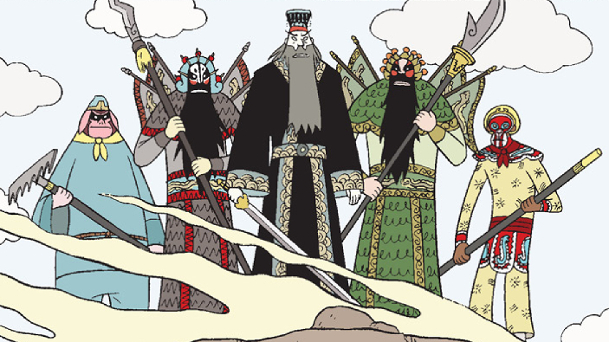 Last fall I taught a new colloquium, History 297, as part of a methods sequence required for all majors. As I’ve detailed in previous posts here and here, our department has recently expanded a single-semester methods course into a 2 course sequence, with one course that focuses on historiography and another that’s research centered. One of the reasons we’ve made this change is to allow for more time for curriculum focused on digital fluencies.

I’m still processing the “take-aways” from my efforts in curriculum development in the first round of this course, particularly in relation to digital projects. At the same time, I’m also looking ahead to next fall’s course and imagining its own thematic design. So a bit on the first here, then I’ll introduce the second…

Last semester I chose a theme for the course in China’s Taiping Civil War (1850-1864), an event that devastated China, leaving 20 to 30 million dead, and its own complex legacy. For their digital project, my students worked in three groups to build content for a website – TaipingCivilWar.org –  that featured an annotated Zotero bibliography & author interview (with Tobie Meyer-Fong, author of What Remains: Coming to Terms with Civil War in 19th Century China), a map with charted entries from primary sources related to the conflict, and an interactive timeline with key dates and similar excerpts from the conflict’s primary sources.

I’ve shared a longer post on this project, noting broader questions and also some of what I saw as the strengths of the project, namely:

– Student Authorship: Website design = its own kind of authorship, which itself seemed empowering for those involved. In other words, also another kind of more active learning.

– Collaboration: The digital project was very much collaborative work, which is itself a valuable experience to gain. Challenges exist here too, of course, see the original post linked above for more on this issue, and the others too. 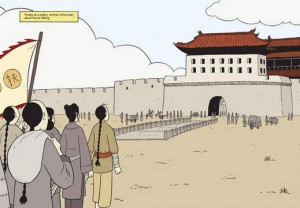 This coming fall, I’m introducing a new event as theme for the course: the Boxer Uprising of 1900 (also somewhat inaccurately known as the Boxer Rebellion.) This event occurred during the summer of 1900 when the Qing dynasty’s imperial army along with peasant “Boxer” troops opposed to Westerners and especially missionary presence in China besieged Beijing’s legation quarter. Making world-wide news for fifty-five days until an alliance of international troops stormed the capital city, looting as they went, this conflict has left a rich collection of primary sources for today’s student of global and local history.

It has also recently inspired Gene Luen Yang, author of the award winning graphic novel American Born Chinese, to publish a two-volume graphic novel entitled Boxers & Saints (2013). In this work of historical fiction, Yang tells the story of two lead characters who each portray a side of the struggle, Boxer and Christian. As the book’s own summary lays it out:

In two volumes, Boxers & Saints tells two parallel stories. The first is of Little Bao, a Chinese peasant boy whose village is abused and plundered by Westerners claiming the role of missionaries. Little Bao, inspired by visions of the Chinese gods, joins a violent uprising against the Western interlopers. Against all odds, their grass-roots rebellion is successful.

But in the second volume, Yang lays out the opposite side of the conflict. A girl whose village has no place for her is taken in by Christian missionaries and finds, for the first time, a home with them. As the Boxer Rebellion gains momentum, Vibiana must decide whether to abandon her Christian friends or to commit herself fully to Christianity.

A finalist for the 2013 National Book Award, this graphic novel seems a useful entry point for students who will be investigating academic studies of the Boxer Uprising as an historical event, including ones that Yang himself has cited as influential background reading for his own novel. Prominent among these studies, as it happens, is the award-winning work of my dissertation adviser, Joseph Esherick, whom I consider a leading candidate for this coming year’s scholar-interview for my students… (Sidenote: Joe, 不好意思, I’ll be in touch before long!)

So my students will start with a graphic novel, but they will be reading diverse academic studies as the focus for their literature reviews, debating different approaches, and thus becoming experts on the subject, which should also provide them with a new perspective on a work of very engaging historical fiction as well. Here’s where my plans get muddier.

Again, I want to have my students working with primary sources alongside the secondary sources that are the core of the colloquium.

There are rich collections of primary sources available online in English (and other languages) thanks in part to the fact that this event happened in 1900 and so many books and newspapers sit available in full-text online, freely available before copyright restrictions fall on them. There are also a fair number of photographs that can be found online in archival collections.

One disadvantage, though, is perspective: the sources my students will be using will be entirely English or European-language based (except in the rare case, my students generally do not have Chinese language capability — and certainly not classical Chinese necessary for documents from 1900.)  So they’ll be working exclusively with sources from a certain perspective amid what is in many ways a colonialist conflict… On the other hand,  of course, this may make for an excellent teaching point and add plenty to explore.

The more fundamental question is simply what will they be designing?

Here’s what I’m imagining for a digital creation, rough in form so far, suggestions for directions, further fine-tuning, warnings of pit-falls, etc., all welcome:

One of the main audiences for Boxers & Saints is the Young Adult (“YA”) audience. It’s a book that sits in many  high school or middle school libraries. My students themselves are only a few years away from those same school libraries and classrooms. At the same time, I have a significant number of students who are also training as dual History and Education majors to return to teach in those schools. Why not embark on a digital project in which students are using their experience studying the Boxer event to create an online curricular resource of their own, openly available for K-12 students and teachers both to use?

I could see the students exploring textual and visual sources, individually having to choose one of each, then writing up their own contextualization — origins, location (again, perhaps mapping these?), authorship, any associated data, and then also composing a set of related questions for discussion to accompany those sources. They could work in groups, providing peer-feedback. Modelling and testing lesson plans? I could also have them do an analytic write-up for me, as background to those questions, as a graded assignment.

Some analytic dynamics that may come into the discussion (and perhaps, or perhaps not, the site?)

– dynamics of only having, it might seem, one side — the Western side – of the story in the dominance of Western sources?

– can one read other sides in the texts and images through missing elements, traces in the pictures? (There are some secondary readings here that may assist with this analysis, incidentally.)

– what’s the relationship between historical fiction and history as written by scholars? Graphic novels and textual scholarship?

Could this, or something related, come together as a website for students in K-12 who might be reading Yang’s graphic novel and want to learn more — and see more — of the actual history? A website with texts and images and Q’s for a class that’s reading the novel to dig into? Would it be something their teachers might find useful?

What digital elements would complement this project? Further it?

Should I be more (or less) ambitious?

Suggestions from any high school or middle school teachers or librarians? I’d love to expand the conversation…

Post-script: Meant to add these links to the original post — for more on Gene Yang’s Boxers & Saints, see his interview at The New Yorker and also Wesley Yang’s review in The New York Times. The video trailer for the work (all our works should have video trailers now, no?) can be found at First Second / Macmillan Publishing here.